September 11 never fails to evoke memories of that horrible day in 2001 and, I haven’t met anyone who was old enough to remember that can’t share exactly where they were or what they were doing. It’s one of those moments in history.

Each year, as the day approaches, I watch the tributes and videos that remind me of the initial feelings of bewilderment followed by dread, fear, and sadness. We watched the towers fall, saw the pentagon hit, and tried to grasp the horror and confusion of people covered in soot and ash, trying to escape awful scenarios. And, even in here in Texas, everyone knew someone who had loved ones that were caught in the travel nightmare or worse.

I remember, but you know who doesn’t remember? My grandchildren. Sure, they’ve

heard us telling our tales of the day because we tell the stories every year but, they have no concept of what it all means.

Fortunately, we were able to remedy that a little bit today. Just a few miles from our home, a tribute was set-up in a park for the public to take a self-guided tour of the timeline of events. Even more powerful than the pictures were the 2977 flags honoring the men, women, and children who lost their lives. It offered an opportunity to tell the stories differently, surrounded by so many red, white, and blue flags. 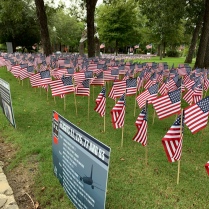 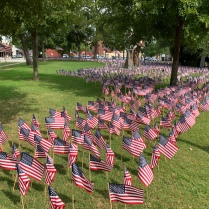 They may not ever grasp the feelings we experienced on September 11, 2001, or in the following weeks. I hope none of them ever go through another tragedy or attack even close to what happened on that Tuesday, but at the very least, the sea of flags made an impression of the sheer number of people who died and, hopefully, they, too, will not forget.

President George W. Bush September 14, 2001 “…..I want you all to know that America today, America today is on bended knee, in prayer for the people whose lives were lost here, for the workers who work here, for the families who mourn. The nation stands with the good people of New York City and New Jersey and Connecticut as we mourn the loss of thousands of our citizens…”