Recently, several members of our family took a day trip to Palo Duro Canyon just outside of Amarillo and Canyon, Texas.  We hiked and played and had the best time despite high heat and several mishaps along the way. Since childhood, this has been one of my favorite places to visit. 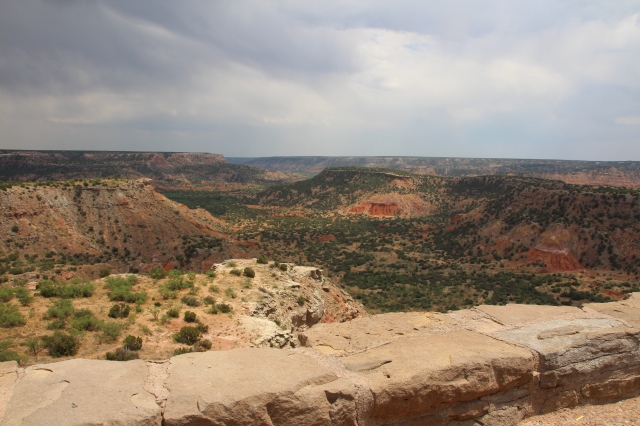 Part of the plan for the day was to see the musical production of TEXAS.  The Pioneer Amphitheater, nestled in the heart of the park, is a family favorite and a visit to Palo Duro Canyon is always more complete when we eat barbecue and see the show.

As we enjoyed our meal a few clouds along with some nice breezes moved in and felt great.  After an afternoon of hiking and playing the adults were happy to sit and enjoy a cold beverage while the kids continued to climb the hills.

As it always is, the show was terrific.  The lone cowboy riding across the top of the canyon with the Texas flag was poignant.  The music, dancing, and singing were superb.  The fabricated lightning and gunshots made us all jump – even though we knew they were coming – and the finale with the dancing water and lights was amazing. After the show ended the actors were gracious and patient while they chatted with the audience and posed for many pictures.  Eight-year-old Claire was excited to get a photo with some of the main characters, especially  Calvin Armstrong and Elsie McClean who were two of the leads.

After we loaded up the cars and began the drive out of the canyon I exclaimed, “This was a great day!”  Hubby Ronald, looking in the rearview mirror, mentioned that our son-in-law, Leslie, kept turning his headlights off – presumably to try and see the stars. As we neared the top, and a good cell signal, his phone began to ring and our daughter, Krista, told us their car was acting up and they were losing power.

Limping they made it to the entrance where we were all able to pull over without blocking all the traffic behind us.  Popping the hood it looked like it was either the battery or alternator.  Hubby Ronald is always super prepared, the handiest person I know and incredible to have around in an emergency like this.  We would be back on the road in no time….no problem! Except this time, with all the tools somehow the jumper cables were missed.

The traffic coming out of the canyon had slowed to a trickle but we began to wave our arms in hopes someone would take pity.  Several people offered to stop but no one had the jumper cables we needed until a young man came along.  He rolled down his window and told us he could definitely help.

As Ronald and Leslie got busy we began to chat with this nice young man.

“Um, actually I’m in the show”

“Oh, really?  Do you have a part or do you work behind the scenes?”

“Oh, I have a part. I play Cal – Calvin Armstrong”

Remember Cal?  One of the leads?

The good news – he had taken so many pictures with fans that he didn’t recognize us, either.

The car started and, giving Sean (that’s his real name :)) many thanks before saying our goodbyes we finally made it back to the house around 12:30 in the morning.  Pretty much dropping dead-weight and deeply-asleep kids into their beds the logical thing would have been for the rest of us to follow.  Instead, we ended up in the kitchen where we laughed until we cried and rehashed the events of a spectacular family day.

Car trouble resulted in us being saved by the star of the show.

p.s. – it was the alternator but a couple of hours under the hood and Ronald and Leslie got it all fixed.  And, in the end, it was….no problem.

Well, maybe I should say…it wasn’t a big problem.

Coming up next  – a day of hiking, hot temps, and more mishaps.

One thought on “TEXAS and Calvin in the Park”