For the parents out there – have you ever said to one of your children, “I hope you have a child just like you”?  And, if you did say it, was it because they were being about as perfect as perfect could be?  Or… not? Maybe it was said in one of those completely exasperating moments.  I don’t actually recall if I’ve said that to my children. Chances are, at the very least, I said it to my son, Joshua.

Joshua is all grown up now and he and his wife just had their second son but, when he was a child he was always precocious and inquisitive.  His curiosity kept me on my toes and is now legendary when we reminisce about antics from his younger days.

I didn’t say my thoughts made any sense.

But, they did make me smile.

We were having a visitation for my grandmother at the funeral home.  She looked peaceful and pretty in her casket.  As it usually is the top half of the casket was open and we could see my grandma from the waist up.

Joshua, fairly young at the time – and always curious – climbed onto the side of the casket to get a better view.  As he looked at her he decided he needed to see the rest of her and pushed the satin drape aside to get a better look.

Pretty much in the coffin at that point, he yelled, “HEY! She doesn’t have any shoes on! She’s barefoot!  What’s she supposed to do when she gets to Heaven?  Why does Grandma get to go barefoot and I have to keep my shoes on??”

Oh Joshua, how I love you.

Baby Alan, with every joyful ounce of a Nana’s love… You hit the jackpot with your daddy.  I hope you grow up to be just like him.

I never tire of watching the sun rise or set and, I never tire of photographing it, either.  There are way too many beautiful ones I’ve taken pictures of to limit this post to just one.  Although I did manage to keep it to ‘just’ five.

On-the-go-picture of the sunset: driving north on HWY 287 to Amarillo

Sunrise on Lake Lewisville at the Montserrat Jesuit Retreat House 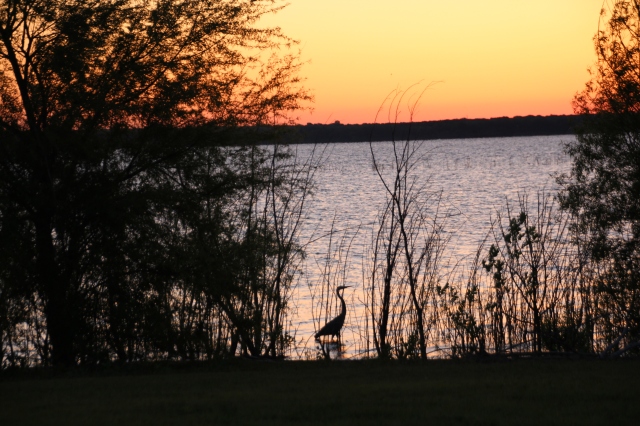 A heron at sunrise also at Montserrat 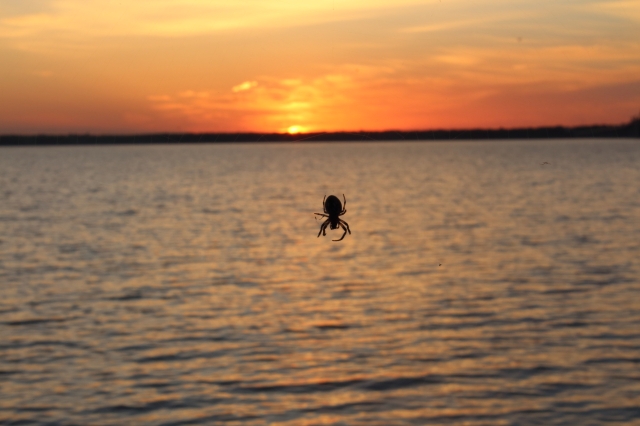 Sitting on the dock watching a spider and the sunrise

Our son, Patrick, is a senior in high school this year and I want some nice pictures of him.  Always looking for ways to save a buck or two I decided to take some shots on my own and see if I liked what I saw.  He’s been playing marimba for the band since his freshman year and music is a big part of his life.  Naturally, I want  to include this monster instrument in some of the shots.

Being 18 he, at first, gave me nothing but scowls and eye rolls but, then, once we had a little smile-or-else chat (that’s the polite version) he cooperated and we actually even had a couple of laughs.

Round 1 was strictly experimental and I haven’t decided if I’m happy yet or not.  We will see.

Wanting some close-up shots I enlisted the help of younger brother Ben.  These may be the funniest of the series because there is no way to crop Ben’s rear end out without losing part of Patrick’s head.  Suffice to say there will be Round 2 because the shot hasn’t happened yet.

In Texas, winter weather is short-lived and very temporary.  Snow, ice, and messy roads don’t (usually) last very long before temperatures rebound back into the 50’s and 60’s.

Last year we spent two weeks in and around Jiading, China – a ‘suburb’ of Shanghai.  Our oldest son, Joshua, was living there with his wife, Emma, and we were fortunate enough to visit.  A rainy day had given us a break from sightseeing and when it stopped we ventured out.  What we stumbled onto ended up being one of my most satisfying and favorite memories.

When the rain tapered off we ventured out for lunch and ended up exploring the streets and shops in the surrounding area.  Our group split up which left my son, Patrick, and I hanging out together.

We were wandering around, ambling in and out of the little shops when I spied a sign with a teapot.  Loving all things tea, and especially drinking tea in Asia, we went into the shop to see what was what. The shopkeeper seemed excited to see us and began talking.  Unfortunately, we had no idea what he was saying.  We wanted to ask him questions but were not able to communicate effectively with him.

Between using hand gestures – and speaking super slow (as if that would help) – we found no success asking if his teapots were for sale or just display.  We left the shop to find Joshua – who speaks fluent Mandarin-and, upon our return, discovered this gentleman was completely delightful and wanted nothing more than to share his tea while working on his painting and flute-playing.

One of the things I love about staying in less touristy areas is stumbling upon these amazing experiences that you can’t buy with money.  It had been a lazy, rainy day calling for a ponytail and no make-up.  No matter that I was ultra-casual, our host could have cared less.  Discovering this hidden gem and being treated to an absolutely wonderful encounter completely made my day and ended up being a highlight of the trip. 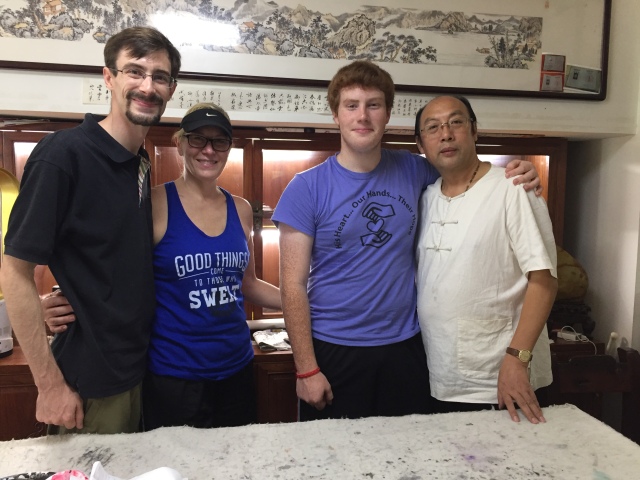 If you would like to see other posts from our China adventures check out these pieces:

What’s In A Shanghai Name 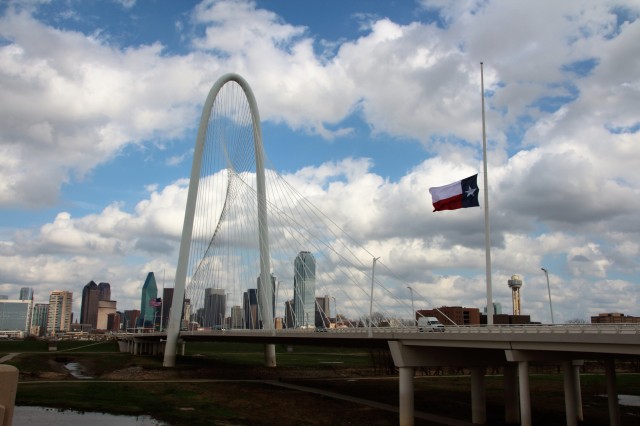 Mention Texas and the first things that might come to mind are cowboys, horses, oil wells, Tex-Mex and barbecue. Or maybe it’s our love of all things football and our flare for doing things BIG.  While all of that is true it only describes a portion of who we are here in the Lone Star State.

The reality is Texas is very diverse culturally.  And, one of those cultures I recently experienced is the Czech heritage.  I was born in Dallas and have been back in Texas since 1979 and yet, I had no idea what a strong influence Czechoslovakian immigrants had on Central Texas.

First arriving in Texas in the mid-1800’s they built some of the most beautiful European influenced churches I have ever seen.  Who knew Texas contained such amazing dwellings for worship? Still in active use,today they are known as the Painted Churches of Texas.  My mom, having seen a piece on television about them, encouraged us to take a weekend trip and begin exploring.  A total of eight were in the area of Shulenburg which is off of I10 – smack in the middle between San Antonio and Houston.

We were overwhelmed by their beauty and the heritage which has been preserved so lovingly.  For this piece I bring you the first two churches we saw located in the towns of Hostyn and Ammansville

Our first stop was not actually one of the painted churches.  However, we were in the mood to explore and so we followed the signs to see what was what.

We were not disappointed.

The Queen of the Holy Rosary Catholic Church in Hostyn had something going on and we did not step inside.  That was okay, though, because the outside was enough to make us say, “wow”. 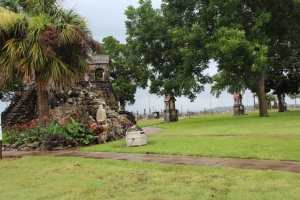 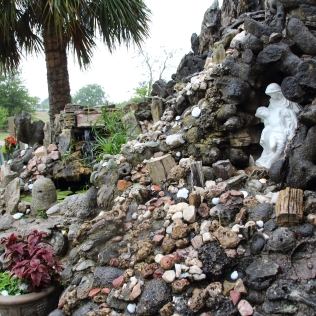 The Lourdes Grotto was the largest. 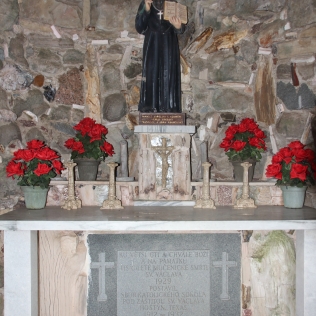 The cemeteries at each church were similar and different from a typical American style.

From there we went to St. John The Baptist in Ammansville.

As we pulled up we saw a sweet little country church. 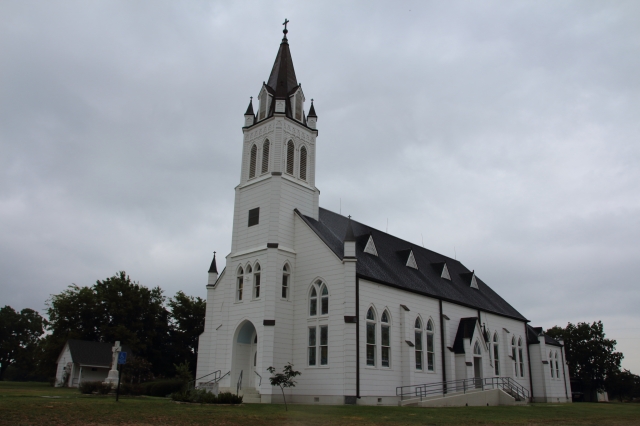 The quaint white building gave no hint as to the beauty inside.

The detail was amazing and intricate. 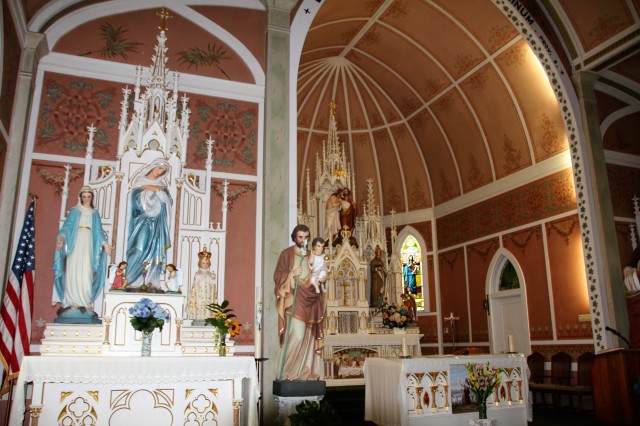 The back of the church – containing the choir loft – was also pretty.

Wandering around this sweet and holy property we were in awe of the magnificence we were experiencing.  Knowing we were at the beginning of the tour we couldn’t wait to see what other beauties were out there.

It is wonderful to walk into the church when it is packed with parishioners ready to worship.  It is also amazing to visit when it is completely empty.

I took this picture of the crucifix reflecting  in the baptismal font with my iPhone.

It was just me and Jesus.  The peace was overwhelming and the beauty of the moment wondrous.

An ordinary Sunday afternoon spent enjoying my boys, my dogs and lots of sunshine. (The Hubster was out of town)

Luxurious Green-ness is abundant during springtime in this great state of Texas! 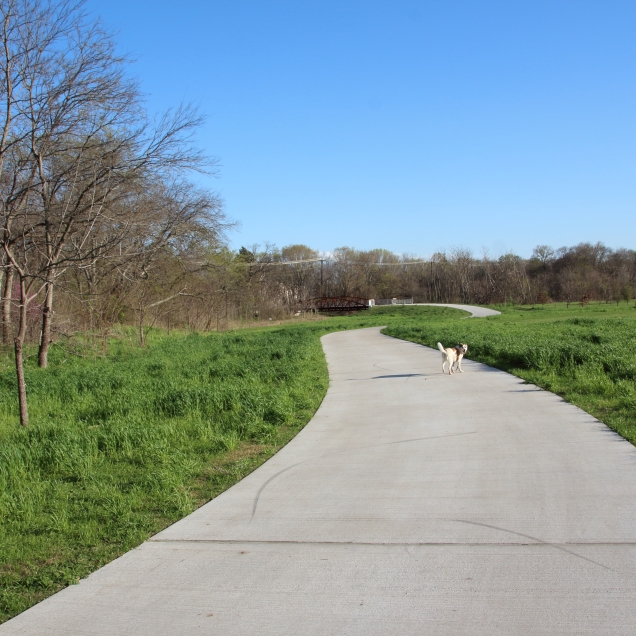 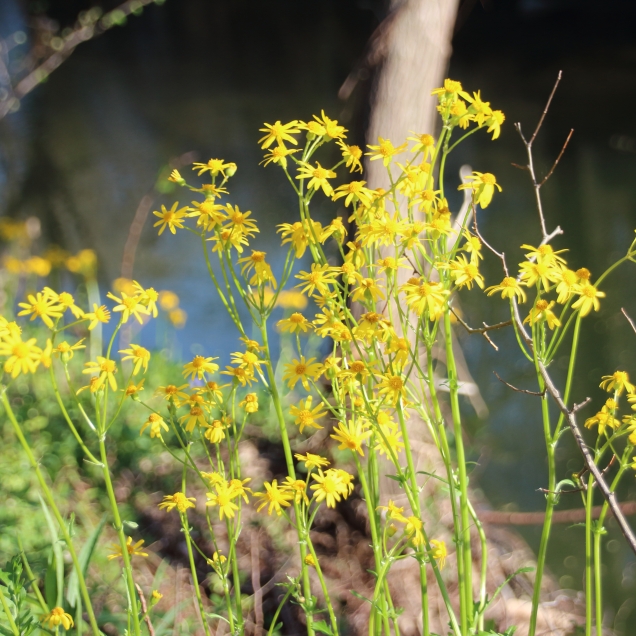 Feeling atop the circle of life with the death of my aunt followed closely by the birth of my grandchild, it has been a hectic week. As they always do, each of these life happenings kindled those deep emotions reminding me, once again, how I need to love deeply.

My aunt was a favorite and my childhood memories are filled with her laughing, joking, making smart-aleck remarks and her family famous German Chocolate Cake.  The last several years, especially since the death of her husband, finding joy in daily life seemed to be more of a struggle but, she still made us smile with her constant repetition of phrases like, “I’ll tell you for durn sure” and “well o gosh o Friday”.  (I never knew what the second one meant or where the saying came from but it was a staple) 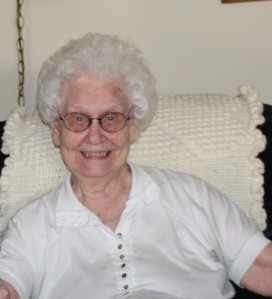 She had a full life – even went parasailing at the age of 80.  And, while I know she is no longer suffering, and has been reunited with those she loved so dearly, I will miss her. 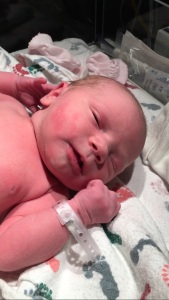 And, so, as death passes a new life begins with the birth of Colette Grace this week.  Colette is apparently a very laid back and relaxed baby who is in no hurry to go anywhere fast.  She took her sweet time introducing herself but, when she arrived, her birth was beautiful and filled with a quiet that was broken only by her first breaths and a good cry with the doctor announcing, “it’s a girl!”.   As Colette’s life began on the outside of her mother’s womb, there was a peace prevailing in the room.  A peaceful beginning for Colette and a peaceful ending for my aunt.  A lovely way to end and begin life.

When they got home I watched her sleeping in the bassinet and I was surprised how tiny she looked.  It really is so easy to forget how little they are as newborns and how fast they grow.  This was driven home that evening when we got to video chat with our grandson in Japan.  At 3 1/2 months old he is already getting big and is smiling, talking and changing everyday.

Birth, life, death – it is all closely entwined and serves to remind me how lucky I am to have so much love in my life.  I hope those around also feel deeply loved by me.