On Monday morning Facebook lit up with posts about the Blue Angels coming to North Texas.  As they have in other cities, they would do a flyover to honor COVID19 frontline responders and essential workers.  But, it became more than that. 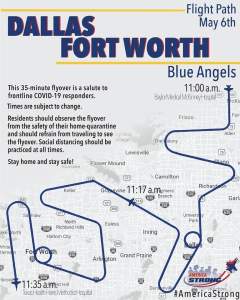 Whether it was on social media or the news the excitement was palpable with the notion that for a few seconds the public would be treated to seeing the amazing Blue Angels.

Why were so many of us so excited? After all, it was just 6 jets streaking across the sky.

First of all – it was 6 jets streaking across the sky! And, in a formation!! Sometimes a very-tight-so-close-that-it-was-kinda-scary-looking formation.

Second of all – they were doing it to honor the American workers!

Third of all – don’t we all love planes, trains, and cool cars? Okay, maybe not absolutely everyone loves them but a lot of us do.

This was the most exciting thing to happen in the metroplex since the quarantine began. For a brief moment, life felt normal again. More importantly, it felt like, instead of 47 different opinions on every decision being made, that we were all one.  Excited and eagerly anticipating a brief glimpse of these great symbols of America fly right over our hometowns.

After the flyover, the social media I saw was filled with amazing pictures and videos.  Some from cell phones, some from professional cameras.  All filled with pride that Dallas, Ft. Worth, and all the cities around were honored. The Blue Angels and the US Navy may have been officially recognizing first responders and essential workers but the gift they gave to many many more of us lifted our spirits, renewed our sense of patriotism, and boosted our morale. 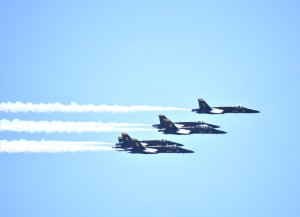 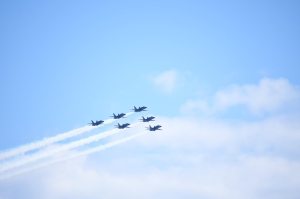 For my own family, it also took us on a trip down memory lane.  Way back in the olden days we would go to the Pensacola area for a week each summer.  And, every Tuesday we would haul ourselves out of bed so we could be at the Naval Air Station before 8:00 am because we knew that the Blue Angels practiced on Tuesday mornings and that the public could watch for free.  (Again, this was 15 + years ago – I have no idea what they do now).  Following the show, we would visit the National Naval Aviation Museum.  It was always a wonderful morning and highlight of our beach week. 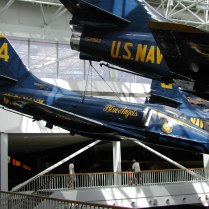 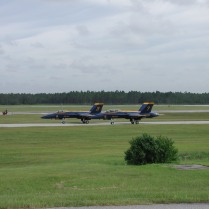 Blue Angels and US Navy – THANK YOU! The flyover today, along with the trip down memory lane, made this a very nice quarantine day.